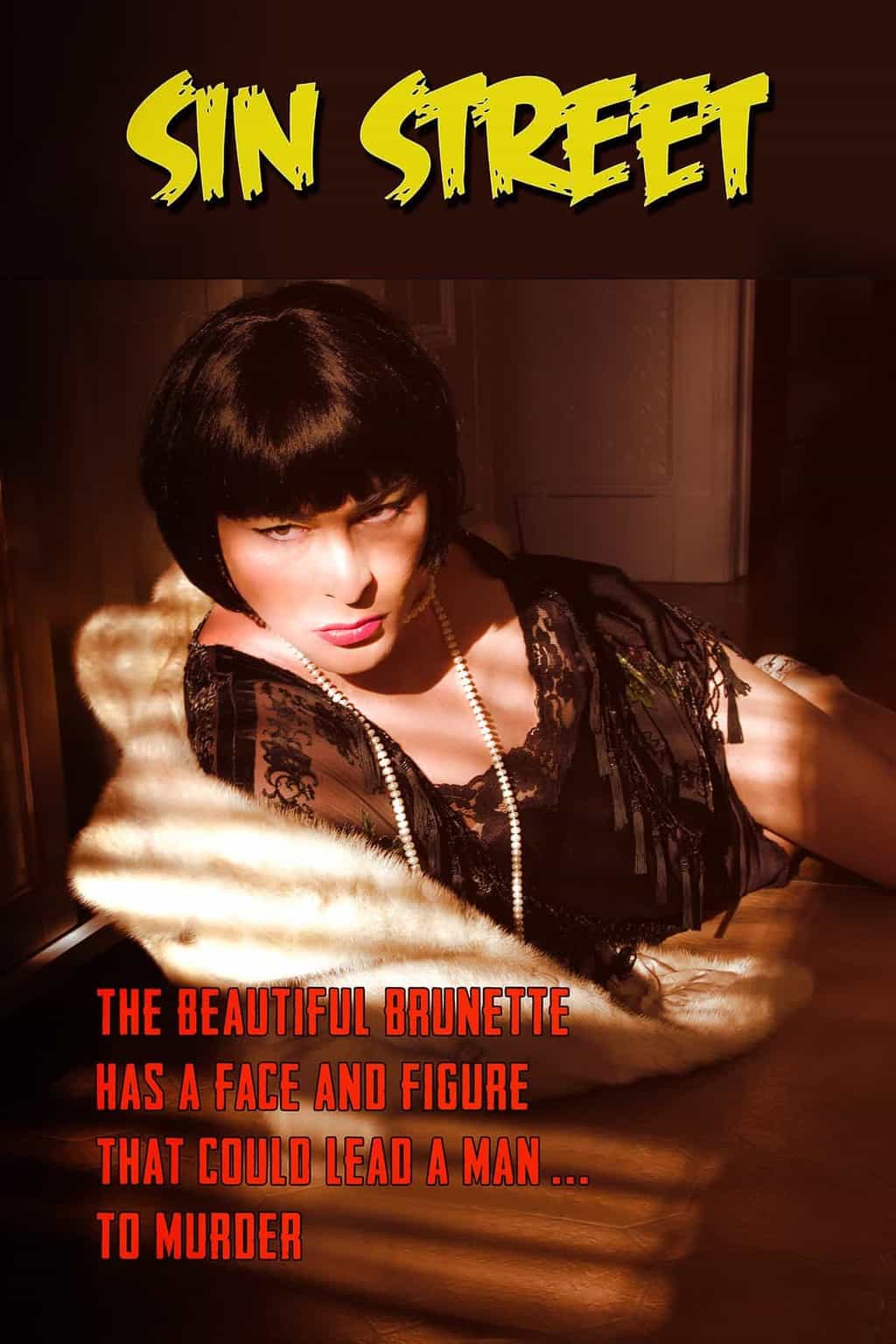 My Femme Fatale Portfolio has its roots in the shadows and violence depicted on pulp fiction book covers and film noir movie posters. At the core of these stories is an edgy morality tale. ‘Bad girl’ characters live in a place and time where good is not always rewarded or evil inevitably punished. Central to this story is the predatory femme fatale, sometimes portrayed as a character that is not all bad.

Within the mysterious mise-en-scène, gender performance artist, Fred Koenig, appropriates the dark haired, noir-heroine dripping in furs and jewels as a character of multiple and hidden  identities. For SIN STREET (2013), the inner surface and the outer show are as interchangeable as the intimately linked masculine and feminine roles.  Sex is the femme fatale’s  weapon. She uses her attractiveness to manipulate the male protagonist. Better not to be too pretty, too aggressive or too sexual or you might be killed as the film noir heroine usually dies. The warning is well learned by generations of young girls.  The film noir moral lesson is that we are all connected; that the lure of transgression makes us closer than we think.

The exhibition EVIL: A  MATTER OF INTENT addresses the faces of inhumanity and explores the struggle between the acts of evil, (yetzer hara) and the acts of good (yetzer hatov).

“The artists in this exhibition as do many of us, have a vision of how to proceed. Less rhetoric. More action. It is up to each and every one of us to wage war on evil.” Laura Kruger, Curator

ART IN THE PUBLIC EYE: What’s All the Fuss? This exhibition examines the work of artists who investigate the controversial subjects that spark public discussions today. 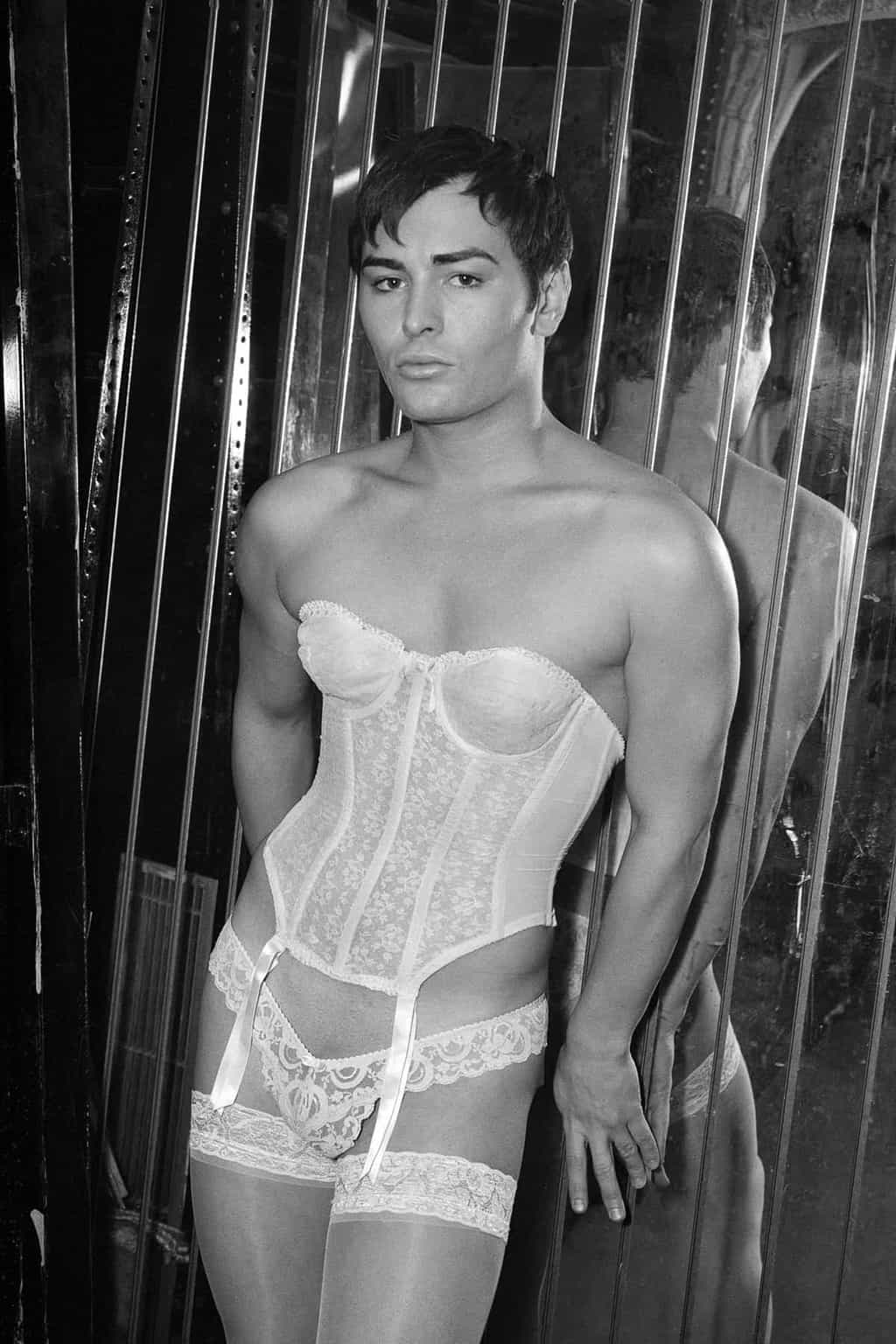 From the earliest days of my career in art and photography I have photographed strong and defiant people who bravely break taboos and re-define their cultural and sexual representation. Many of my images embrace the fluidity of gender identity and explore the possibility that we each hold a myriad of alternative selves within us.

SACRED CORSET (1997)
In the eighteen years that I have been photographing the French performance artist, Fred Koenig, we have collaborated on producing images that explore a gender-fluid queer identity. My HE/SHE Portfolio reveals the spectrum of Fred’s transformations into self-affirming portraits of his myriad personas and alternative selves.

For SACRED CORSET, Koenig dares the viewer to cross over boundaries of imagination and desires. Here is a fearless man who is empowered and transformed by the ambiguity and fluidity of his sexuality. 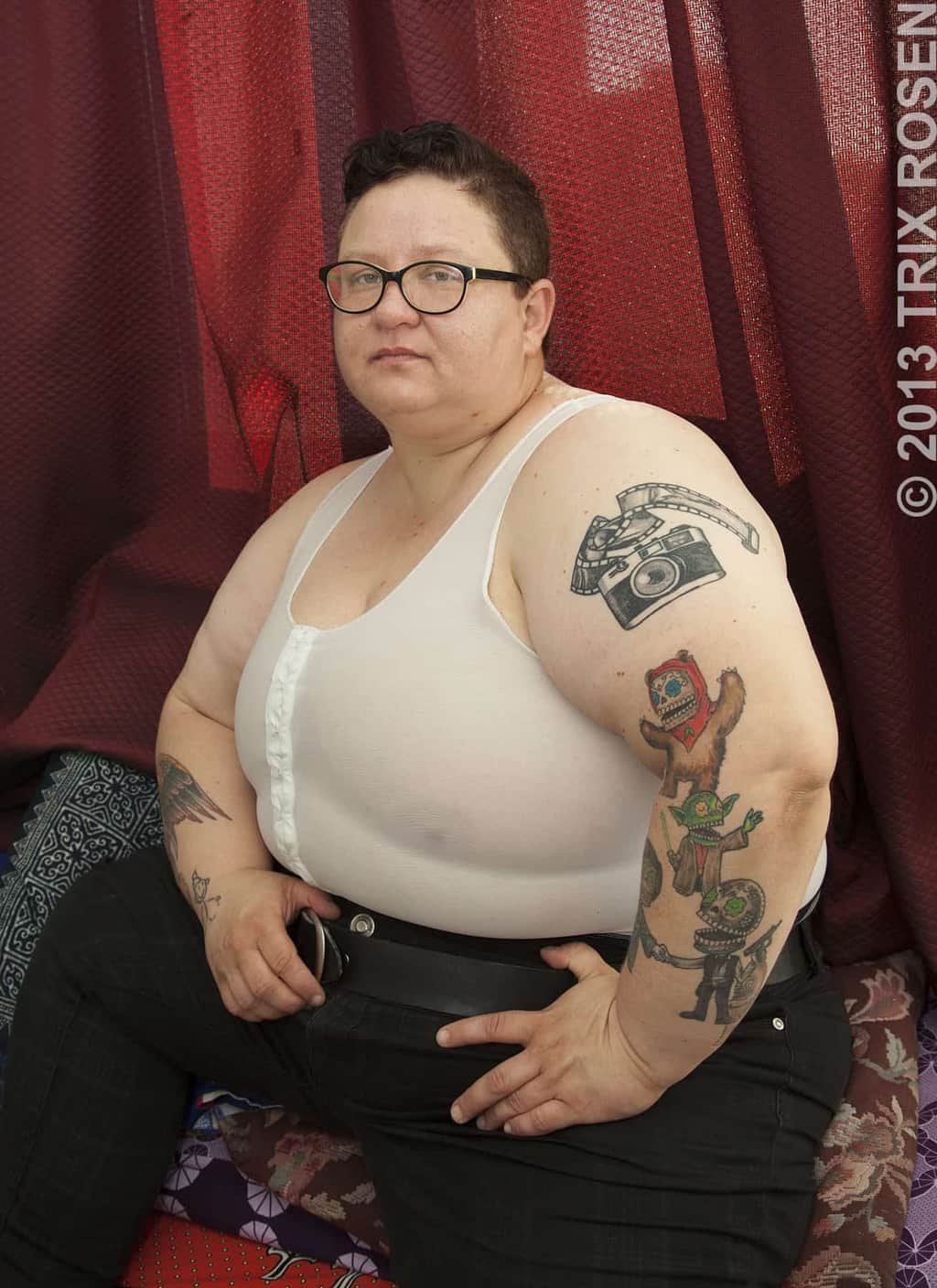 Dean, the photojournalist and visual artist depicted in the portrait, AUTHENTIC GENDER QUEER,  self-identifies with the pronoun “they,” and says: “There is nothing more courageous than being yourself in a world that tries to render you invisible in mundane and violent ways.”

WHO DO YOU BELIEVE IN
Pigment print on aluminum with hand-filed edges, 12 x 18 inches

I photographed the graffiti drawing, WHO DO YOU BELIEVE IN, on a cell wall of the Women’s Wing at the abandoned Essex County State Penitentiary, in North Caldwell, NJ. Both the text and the inmate’s haunting, hand-drawn portrait poignantly illustrate one of the fundamental questions we ask about life.

For the exhibition, VISAURAL, I paired it with “Hallelujah,” written by Leonard Cohen and performed here by K.D. Lang, because the prayer-like music affirms a faith in life and love amidst doubts. Cohen has said the iconic song represents “absolute surrender in a situation you cannot fix or dominate.”

Alone, within the steel bars of her cage-like cell, I can imagine the figure in the drawing listening to the repeated one-word chorus coming through the open ceiling above her.  According to the song, even those of us for whom “it all went wrong” can experience transcendence. As Cohen writes: we “stand before the Lord of Song/ with nothing on [our] lips but a cold and broken Hallelujah.”